They say to make hay while the sun is shining, but what about during overcast conditions?

The current outlook for SA investors is not as stormy as it was two years ago, but it certainly isn’t clear skies.

While we started the year filled with new optimism in a new president and the looming threat of state capture vanishing, other problems have remained. Thanks to Eskom, plummeting business confidence scores, policy uncertainty and a host of other factors, we haven’t quite seen the economic rally we hoped we would in 2019…

Luckily, the best thing about markets is that when one thing slumps, another soars. Thanks to some rather unexpected material de-rating, lucrative equity options that were previously high-priced are now more affordable. This is not to say that you should jump ship, not at all! It’s merely evidence of how we can find alternatives in a market that may have us feeling a little confounded. 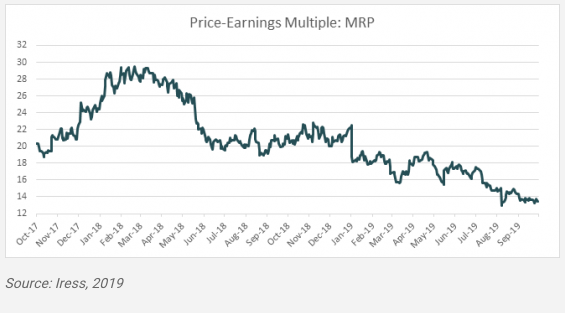 In the face of equivalents like Truworths, Mr Price Holdings has shown ongoing rallying in the face of tough conditions – and, right now, the price is appealing to many investors. According to Cannon Asset Managers’ Chief Investment Officer, Samantha Steyn, “the current valuation is attractive, with a P/E multiple of 13.3 times and dividend yield of 4.6 percent – as compared to its historical five- and ten-year average P/E multiples of 21 and 20 respectively.”

Despite competitive rumblings from the likes of Netflix muscling in on DStv’s territory, MultiChoice is going strong. “The current price (around R120 per share) offers an attractive entry point into this high-quality investment. The group has operational leverage thanks to several cost-optimisation strategies, as well as the ability to grow market share in the middle and mass markets,” says Steyn.

And with sports being MultiChoice’s main drawcard still and the Rugby World Cup having received a lot of viewers, this quarter’s figures will likely be even better. 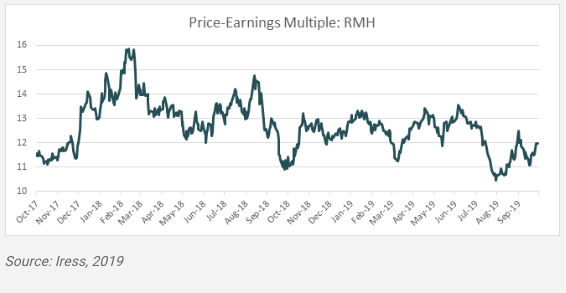 Arguably the most exciting opportunity right now is FirstRand giant RMH, normally well out of reach individual investors. Steyn says that “RMH’s discount to net asset value (NAV) is currently around 11 percent, thus offering an attractive investment into FirstRand. This compares to the three- and seven-year average discounts to intrinsic value of 6.8 percent and 3.3 percent respectively.”

Unlike MRP Holdings and MultiChoice, there have been no big uncertainties shaking the price here, and FirstRand has had a cracker of a year so far, well in line with a recent track record of several stable, good years in a very unstable time. The current price-earnings (P/E) multiple is 12.8 times, with an attractive dividend yield of 4.6 percent. And with FirstRand’s ROE projected to be around 22 percent, this promises to be a very good deal indeed.

These are just three examples and far more exist for us to consider in the face of restlessness or looking for new opportunities. It just goes to show that you don’t have to wait for the sun to be shining to make some hay.

Scroll to top
We use cookies on our website to give you the most relevant experience by remembering your preferences and repeat visits. By clicking “Accept All”, you consent to the use of ALL the cookies. However, you may visit "Cookie Settings" to provide a controlled consent.
Cookie SettingsAccept All
Manage consent

This website uses cookies to improve your experience while you navigate through the website. Out of these, the cookies that are categorized as necessary are stored on your browser as they are essential for the working of basic functionalities of the website. We also use third-party cookies that help us analyze and understand how you use this website. These cookies will be stored in your browser only with your consent. You also have the option to opt-out of these cookies. But opting out of some of these cookies may affect your browsing experience.
Necessary Always Enabled
Necessary cookies are absolutely essential for the website to function properly. These cookies ensure basic functionalities and security features of the website, anonymously.
Functional
Functional cookies help to perform certain functionalities like sharing the content of the website on social media platforms, collect feedbacks, and other third-party features.
Performance
Performance cookies are used to understand and analyze the key performance indexes of the website which helps in delivering a better user experience for the visitors.
Analytics
Analytical cookies are used to understand how visitors interact with the website. These cookies help provide information on metrics the number of visitors, bounce rate, traffic source, etc.
Advertisement
Advertisement cookies are used to provide visitors with relevant ads and marketing campaigns. These cookies track visitors across websites and collect information to provide customized ads.
Others
Other uncategorized cookies are those that are being analyzed and have not been classified into a category as yet.
SAVE & ACCEPT